Say NO to Ageism Campaign

On October 1 – the international day of older persons, which celebrates the amazing contribution made by older people across the world – the Older People’s Commissioner for Wales wants you to join her and Say NO to Ageism.

Older people across Wales regularly share their experiences of being treated unfairly because of their age with the Commissioner and her team, while research shows that over a third of older people – that’s over a quarter of a million older people in Wales – have experienced some form of ageism.

You’ve no doubt seen for yourself the stereotypes of older people that are still so common, or the derogatory and disrespectful language that is still used so often to describe people once they reach a certain age.

The Commissioner’s position is clear: this is simply not acceptable.

If you agree, then join the Commissioner on October 1 and Say NO to Ageism!

How can you get involved?

By working together to #SayNoToAgeism and highlighting the amazing contribution made by older people in Wales, we can change the way society thinks about growing older and make a big difference to people’s lives!

Many thanks for your support. 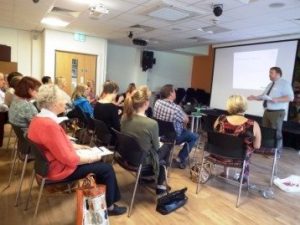 Grow Cardiff is seeking a Treasurer