A campaign to urge people to enjoy a good night out by not having too much to drink is being given a new focus ahead of the Rugby World Cup and Student Freshers Week in the towns and cities of South Wales this autumn.

The Know the Score initiative was launched by South Wales Police & Crime Commissioner Alun Michael and Chief Constable Peter Vaughan to offer positive messages about the consequences of excessive drinking.

It has a simple message for the public: Know the score – drink less, enjoy more.

The campaign has already proved a success, helping to develop a positive culture since it was launched at the start of the last Six Nations, with the strong backing of the Welsh Rugby Union and championed by Wales rugby captain Sam Warburton.

Read more about the campaign

And here’s a letter from Rt Hon Alun Michael, Police and Crime Commissioner for South Wales:

I am writing to thank you for your support for our “Know the Score, #DrinkLessEnjoyMore” campaign, which encourages everyone to think about their own actions and act responsibly while enjoying pubs and clubs around South Wales.

The success of the #DrinkLessEnjoyMore campaign over the 6 Nations period earlier this year and the positive results from evaluation is due to your work on the ground engaging with the campaign and enforcing the messages.

The first phase of the campaign saw an 11% reduction in reports of violence with injury across South Wales. Evaluation by The Centre for Public Health at Liverpool John Moores University which found:

Following this success, we are going to be accelerating the campaign over the next few months with 3 stages:
– Stage 1 will take place during September and October to coincide with the Rugby World Cup and the start of the new academic year Universities and Colleges across South Wales;
– a further stage will cover the Christmas period
– and the final stage will come with the 6 Nations 2016.

As you know:
– At least 50% of serious violence is associated with alcohol consumption
– Around 70% of attendances at Emergency Departments during peak times are alcohol-related

Throughout the campaign we will be posting across Facebook, Twitter and Instagram ensuring that we have maximum engagement the members of the public. We will be promoting the hashtag #DrinkLessEnjoyMore.

If you wish to support the campaign through social media contact John Williams on [email protected] who will be able to supply you with content and we will also be contacting your communications teams shortly. 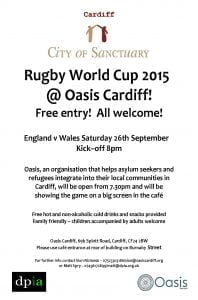 Covid19 Vaccinations for People without Papers