The month-long call for evidence which was launched by the Home Secretary in a written ministerial statement on May 10 is the first step to establishing the scheme for those who have suffered financial loss because of difficulties proving their immigration status.

As part of this process the Home Office will be engaging with affected communities, enabling people to share their experiences with Home Office staff. People and community groups will also be able to submit written evidence.

The call for evidence will run until 8 June. This will be followed by a full consultation on the detail of the scheme.

“People of the Windrush generation have unfairly had the lives they have built in the UK turned upside down. That is not fair.

If we are to design a compensation scheme that effectively addresses the issues these people have faced it is vital that we listen. To put things right we need to understand more about what happened and to understand the personal stories. That is exactly what today’s call for evidence is about.”

To ensure there is sufficient external assurance that the compensation scheme is effectively meeting the needs of those affected, the Home Secretary has committed to appointing an independent person to oversee the running of the scheme when it is in place. Martin Forde QC has now agreed to provide independent advice on the design of the scheme. He is himself the son of Windrush parents and brings a wealth of experience in public law.

This is one of the range of measures that the government has announced. This has included setting up a new team to handle the cases of the Windrush generation and a lessons learned review, with independent oversight and challenge, to look at what happened, why and whether the right corrective measures are now in place.

This morning the Home Secretary also met with high commissioners from the Caribbean to discuss Windrush. As part of a positive and wide-ranging discussion he made clear his commitment to working with them to reach the people who had been affected. 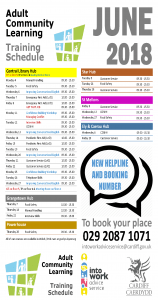 FREE Introduction to Playwriting at The Sherman Theatre